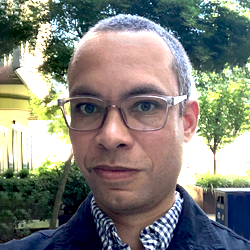 Will is a Research and Evaluation Data Manager at the Center, where he conducts program evaluations and in-house research aimed at promoting the health and wellbeing of young children and their families. He is a quantitatively oriented social scientist with an extensive background in academic, financial and government settings.

Will was previously an Assistant Professor at the University of Oregon, a Politics postdoctoral fellow at Princeton University, a Tax Analyst at the U.S. Congressional Budget Office, an institutional researcher at Caltech and a bond performance analyst at Morgan Stanley Dean Witter’s commercial paper desk. He holds a B.A. in Mathematics and Economics from Washington University in St. Louis, a master’s in economics from Caltech and a Ph.D. in Political Science from UCSD, with a focus on statistical methodology.

Fundamentally, Will’s career has focused on identifying the causes and consequences of public policy. As an Assistant Professor at UO, Will taught courses in statistics, research design, voting behavior and the U.S. Congress at the Ph.D. and undergraduate levels. As a Tax Analyst at the CBO, he served as the primary analyst for the federal Earned Income Tax Credit — a major source of policy support for the working-poor.

In addition to his work at the Center, Will is completing a book manuscript – based on his NSF-award winning dissertation – which statistically analyzes the determinants of congressional, state and local policy following the effective enfranchisement of African-American voters following the Voting Rights Act of 1965 and its impact on health and educational outcomes in the post-VRA South.

Will resides in Portland, Oregon where he enjoys running, falling off his skateboard and discussing social policy and Greek mythology with his lovely daughter, Artemis.