Parents are mentally and physically healthy, with particular attention paid to the perinatal period.

WHY IS PARENTAL HEALTH AND EMOTIONAL WELLBEING AN IMPORTANT PRENATAL-TO-3 GOAL?

Parents’ physical and mental health affects their ability to care for themselves and their children, including their ability to engage in the warm, responsive interactions that infants and toddlers need for long-term healthy development. Yet parents often do not have the resources they need to care for themselves adequately as they care for their children, particularly during the perinatal period, which can pose unique health challenges to families.

Parents without adequate support and resources may experience stress, anxiety, and/or difficulties adjusting to their roles as parents during the prenatal-to-3 period.1 Parental stress has been cited as a risk factor for depression among both mothers and fathers2 and approximately 13% of women with recent live births experienced postpartum depressive symptoms in 2018.3 However, not all mothers get the help they need. A study by the Centers for Disease Control found that among women who had recently given birth, one in eight reported that they had not been asked about depression during postpartum visits, a time when individuals are typically screened and referred to additional services to treat any postpartum concerns.4 Improving parents’ health and emotional wellbeing may boost their ability to respond warmly and sensitively to their infants and toddlers, which will help shape long-term healthy childhood development.5

Due to the social determinants of health—defined by the World Health Organization as “the conditions in which people are born, grow, live, work and age”6—parents who experience substantial adversity are at higher risk of facing physical and mental health challenges.7 These risks perpetuate disparities in children’s health outcomes. For example, due to barriers such as lack of insurance, not all women receive adequate prenatal care, which is critical to ensuring healthy birth outcomes, and women of color are least likely to receive adequate prenatal care.8 The effects of COVID-19 continue to exacerbate these racial and socioeconomic disparities. Data show that COVID-19-related hospitalization rates are approximately 3 times higher for American Indian or Alaska Native, Black, and Hispanic individuals compared to the hospitalization rates for White individuals.8 Other effects of the health crisis, such as stress due to job insecurity and challenges with securing child care, also pose a threat to the mental and physical health of parents who are trying to care for young children.

Because physical and mental health are intertwined, interventions that help relieve parents’ stress also can improve physical health outcomes. Some policies and strategies may impact parental health indirectly by increasing financial resources. Other policies and strategies directly affect parental health by helping parents build social support and reduce stress. In working toward this goal, states can measure progress by tracking outcomes, such as maternal mental health and parenting support, particular to parents with children ages 0 to 3.

Both outcome measures were calculated intentionally in the negative direction to demonstrate where states have room for improvement and to help states prioritize the PN-3 policy goals that are lagging. Out of 51 states, the worst state ranks 51st, and the best state ranks first. The median state indicates that half of states have outcomes that measure better than that state, whereas half of states have outcomes that are worse.

In the five worst states, more than one-fifth of children under age 3 have a parent who reports that they do not have anyone they can turn to for emotional support with parenting, compared to less than 8% in the five best states. Rates of low parenting support vary substantially by race and ethnicity, with nearly 30% of Hispanic children, over 20% of Black children, and less than 10% of White children under age 3 living with a parent who lacks emotional support.

WHAT ARE THE MOST EFFECTIVE POLICIES AND STRATEGIES TO IMPACT PARENTAL HEALTH AND EMOTIONAL WELLBEING?

Based on comprehensive reviews of the most rigorous evidence available, the Prenatal-to-3 Policy Impact Center identified 11 effective solutions that foster the nurturing environments infants and toddlers need. For each of the five policies, the evidence points to a specific policy lever that states can implement to impact outcomes. For the six strategies, the evidence clearly links the strategy to PN-3 outcomes, but the current evidence base does not provide clear guidance on how states should implement each strategy to positively impact outcomes. Four policies and strategies have demonstrated effectiveness at improving parental health and emotional wellbeing. 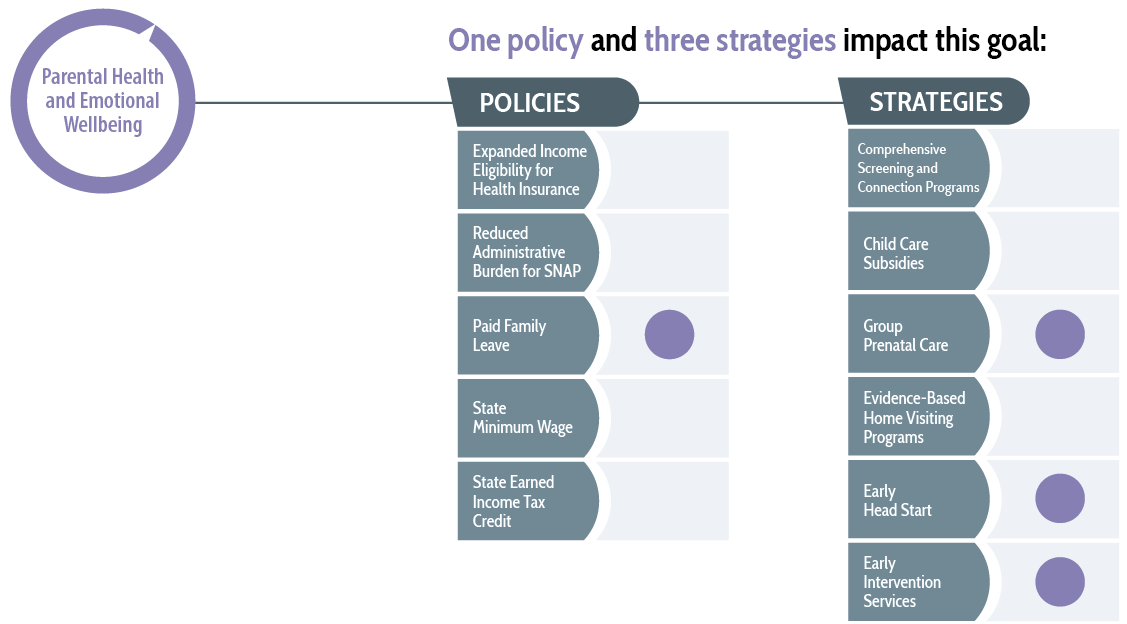 Beyond the policies and strategies proven effective by the current research, states also are pursuing other approaches that hold promise for improving parental health and emotional wellbeing; these approaches have not yet accumulated enough rigorous research to enable drawing conclusions on their effectiveness, or the Prenatal-to-3 Policy Impact Center has not yet conducted a comprehensive evidence review for the approach. Other solutions states are pursuing that can help build the evidence base on parental health and emotional wellbeing include, but are not limited to: