Children’s emotional, physical, and cognitive development is on track, and delays are identified and addressed early.

WHY IS OPTIMAL CHILD HEALTH AND DEVELOPMENT AN IMPORTANT PRENATAL-TO-3 GOAL?

A child’s developing brain is most flexible during the earliest months and years of life. This flexibility provides a window of opportunity for establishing a lifelong trajectory for health and wellbeing. Adverse childhood experiences during this period increase the likelihood of physical and mental health difficulties in adulthood, placing children on a trajectory toward physical health problems, such as cardiovascular disease, diabetes, and respiratory and immunological disorders, as well as challenges with learning and mental health.1,2 Despite the importance of this age period, children are more likely to experience abuse and neglect during their first three years of life than at any other age.3

Safe environments and good nutrition can support lifelong health, as can stable, responsive relationships with adults. Also, interventions that identify and treat early indications of disability or developmental delay during a child’s early years can improve a child’s trajectory, increasing the likelihood of positive health outcomes long term. Such interventions are important because 1 in 6 children in the US has a disability.4 Social predictors of health, such as poverty, increase a child’s risk of disability, as do factors such as low birthweight.5

Breastfeeding can boost children’s immune systems and improve long-term health outcomes, but challenges such as unsupportive workplace policies and hospital practices can limit mothers’ opportunities for breastfeeding, and data show that 60% of mothers do not breastfeed for as long as they intend to.6 These difficulties contribute to racial disparities—Black infants are less likely than Hispanic and White infants to ever have been breastfed.7

The policies and strategies reviewed in this section have proven effective at directly improving children’s health and wellbeing, and they can help states ensure that children’s emotional, physical, and cognitive development is on track and that delays are identified and addressed early.

Three outcomes illustrate factors that predict and reflect children’s healthy development: (1) breastfeeding, (2) immunizations, and (3) child maltreatment rates. These outcomes vary considerably across states, and most vary by race and ethnicity as well.

Breastfeeding is associated with better health outcomes for mothers and children. Overall, 1 out of 6 babies is never breastfed, but the number is nearly double that in the five worst states and half that in the five best states. Black infants are twice as likely as White infants not to be breastfed, and 10 percentage points more likely not to be breastfed than Hispanic infants. 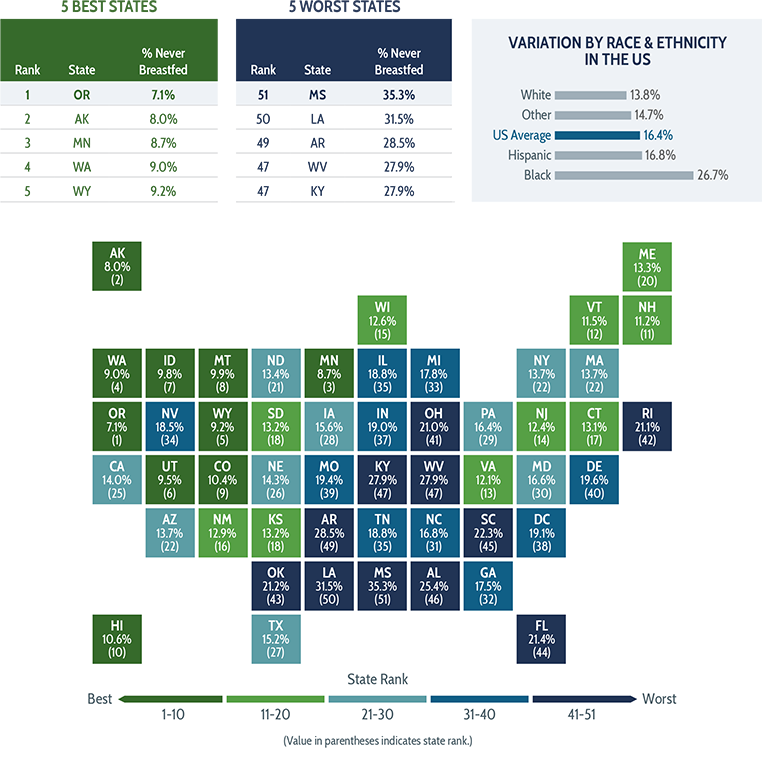 See the Prenatal-to-3 State Policy Roadmap Appendix for a table of state variation in Optimal Child Health and Development outcomes and corresponding ranks for each state.
Source: 2018 National Immunization Survey-Child (NIS-Child). For additional information, please refer to Methods and Sources.

OUTCOME MEASURE: NOT FULLY IMMUNIZED
% of children ages 19 to 35 months who are NOT up to date on the combined 7-vaccine series

Immunizations protect against a variety of diseases that can lead to serious health consequences. In the US, more than one-quarter of infants and toddlers are not up to date on all of their immunizations. Babies in the five worst states are nearly twice as likely not to be fully immunized as babies in the five best states. Rates of immunization do not vary substantially by race and ethnicity. 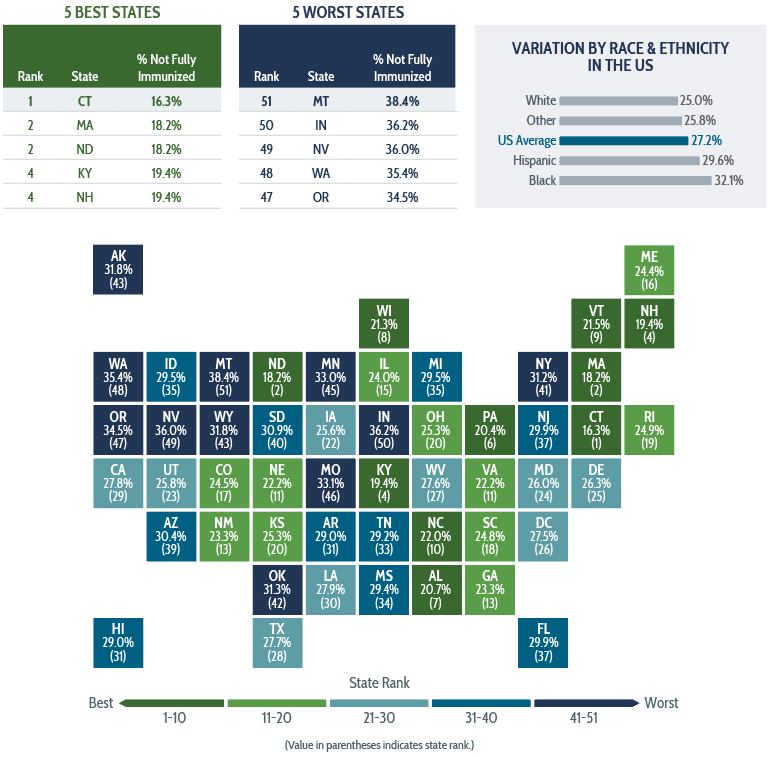 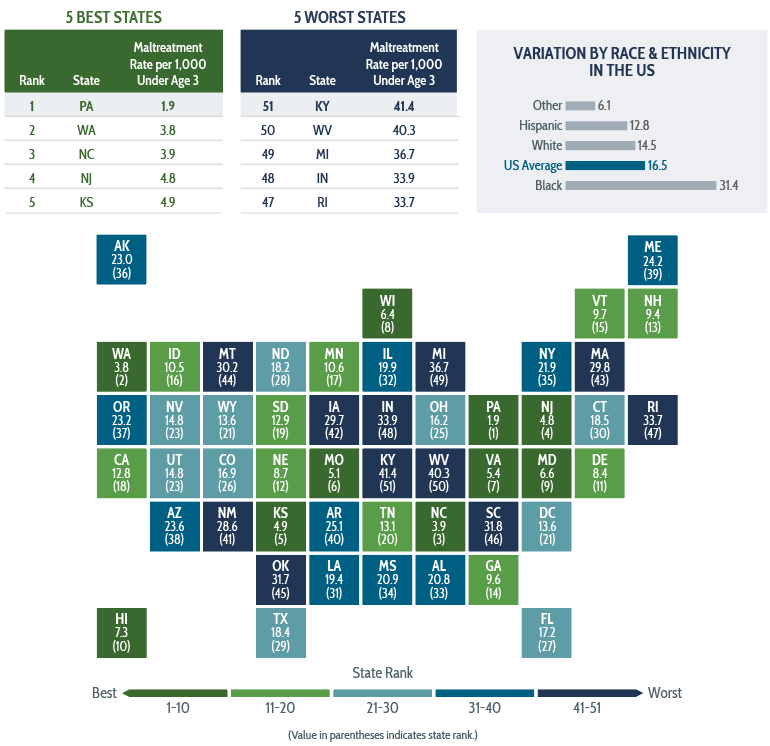 WHAT ARE THE MOST EFFECTIVE POLICIES AND STRATEGIES TO IMPACT OPTIMAL CHILD HEALTH AND DEVELOPMENT? 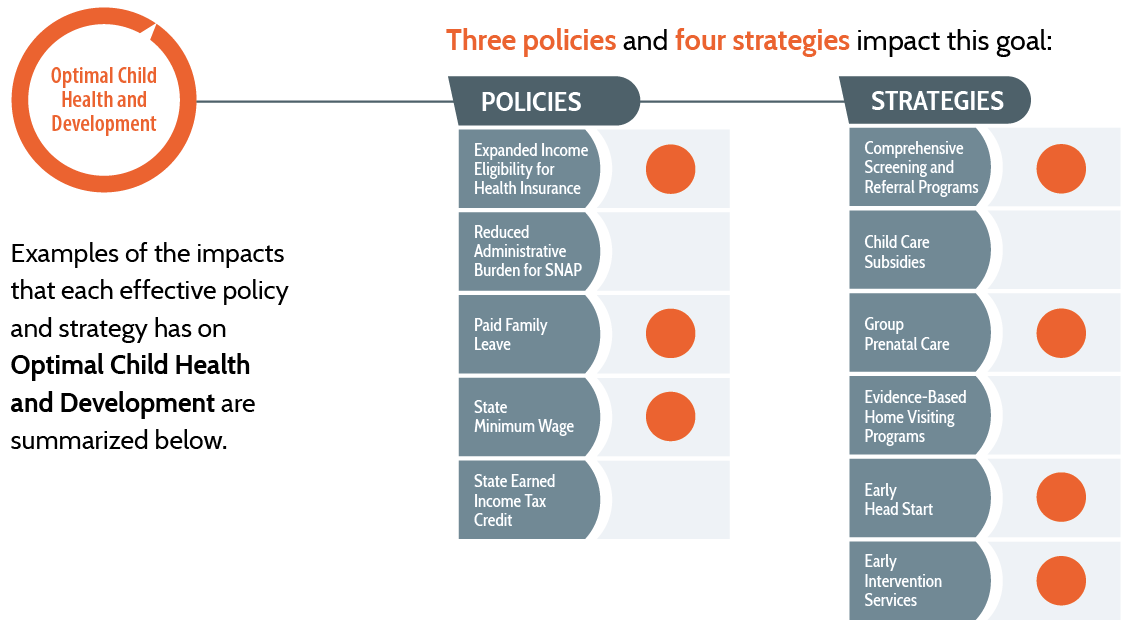 Effective policies have a demonstrated positive impact on at least one prenatal-to-3 goal, and the research provides clear guidance on legislative or regulatory action that states can take to adopt and implement the policy. By contrast, effective strategies have demonstrated positive impacts on prenatal-to-3 outcomes in rigorous studies, but the research does not provide clear guidance to states on how to effectively implement the program or strategy statewide.

Note: The letters in parentheses in the tables above correspond to the findings from strong causal studies included in the comprehensive evidence reviews of the policies and strategies. Each strong causal study reviewed has been assigned a letter. A complete list of causal studies can be found in the Prenatal-to-3 State Policy Roadmap Appendix. Comprehensive evidence reviews of each policy and strategy, as well as more details about our standards of evidence and review method, can be found at in the Prenatal-to-3 Policy Clearinghouse.

Have state adopted and fully implemented the effective policies to impact Optimal Child Health and Development?

Have states made substantial progress toward implementing the effective strategies to impact Optimal Child Health and Development?

Note: Some states in the “no” category for Policy Variation Across States have adopted a policy, but they have not fully implemented it, or they do not provide the level of benefit indicated by the evidence reviews necessary to impact the PN-3 goal. Many states in the “no” category for Strategy Variation Across states have implemented aspects of the effective strategies, but states are assessed relative to one another on making substantial progress. For additional information, go to the State Data Interactives.

Examples of Impact for Optimal Child Health and Development

Download our signature annual policy guide comprised of state policies and strategies reviewed in the Policy Clearinghouse with the strongest evidence of effectiveness to improve outcomes for infants and toddlers.